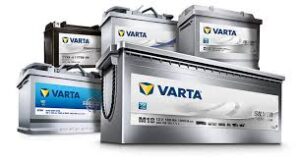 VARTA was founded by Adolf Müller in 1887,
and established in 1904 as a subsidiary of Accumulatoren-Fabrik AFA.

In 1977, VARTA AG’s businesses were split up by Herbert Quandt; battery and plastics operations were retained in VARTA AG, but the pharmaceuticals and specialty chemical businesses were transferred to a new company called Altana, and the electrical business was spun off into a company called CEAG. Herbert Quandt left the company’s shares to his children.

In 2002, the consumer battery activities (excluding button cells) were sold to Rayovac. The automotive battery business was acquired by Johnson Controls. The button cell and home energy storage businesses were acquired by Montana Tech Components.

By 2006, VARTA AG had sold all its operating divisions, and the Quandts had sold their shares. VARTA AG then liquidated its remaining assets, contracts, liabilities and shareholdings, in particular the manufacture and sale of VARTA batteries, while continuing its company businesses.

On 19 October 2017 shares of the VartaAG started flotation on the stock market (Prime Standard). With an emission price of 17,50 Euro the company had a value of 668,5 Mio. Euro[3][4] In January 2018, american company Energizer takes controll over VARTA consumer battery segment (not a part of the VARTA AG).

O’Connell Batteries Ltd offer a complete sales and after sales battery service. We have specialist staff with years of experience in the installation, maintenance, testing and replacement of battery systems. Contact us for more details.